Posted at 17:03h in Repairs by dejohanpauwels 0 Comments
0 Likes

This nice 70’s pedal was brought to me because it didn’t function.

Morley is an old pedal manufacturer from the 70’s, mainly famous for their wah pedals.

Unlike other wah pedal manufacturers like Vox, Morley pedals use an electro-optical circuit, rather than a potentiometer, to control the effect.

The foot pedal controls a shutter in front of a light bulb inside the pedal, which in turn controls a photoresistor.

Sounds cumbersome, but this works really nice. And is more reliable than potentiometer controlled pedals, as the latter tend to wear over time and become scratchy.

Plus, these pedals come in beautiful rugged chrome plated design, I mean, look at it! Isn’t that a looker! 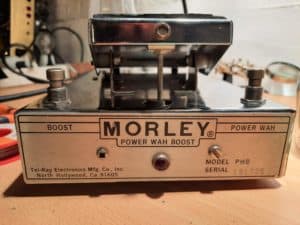 But for this pedal, it turned out that the light was broken. It was a small incandescent lamp and we all know that they don’t have everlasting life.

So I decided to replace it with some LEDs since they should in theory still be functioning when the four horsemen of the apocalypse are underway.

I experimented a bit with different colors of LED’s but ended up using a combination of a bright white and a bright blue led.
As an added effect the pedal gives a eery shine in the dark. 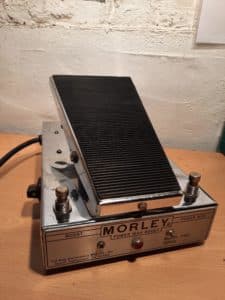 The pedal is a combination of a boost/volume pedal and a wah. The volume pedal gives quite a lot of gain, in the below clip you can hear it pushing a clean Hot Rod Deluxe into overdrive.

The wah is just amazing, very large sweep, something I miss with the Dunlop Wah pedals.

Sorry, the comment form is closed at this time.

This website uses cookies to improve your experience while you navigate through the website. Out of these cookies, the cookies that are categorized as necessary are stored on your browser as they are essential for the working of basic functionalities of the website. We also use third-party cookies that help us analyze and understand how you use this website. These cookies will be stored in your browser only with your consent. You also have the option to opt-out of these cookies. But opting out of some of these cookies may have an effect on your browsing experience.
Necessary Always Enabled
Necessary cookies are absolutely essential for the website to function properly. This category only includes cookies that ensures basic functionalities and security features of the website. These cookies do not store any personal information.
Non-necessary
Any cookies that may not be particularly necessary for the website to function and is used specifically to collect user personal data via analytics, ads, other embedded contents are termed as non-necessary cookies. It is mandatory to procure user consent prior to running these cookies on your website.
SAVE & ACCEPT